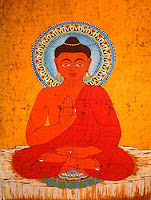 No, this isn't a dreary, depressed, despondent call to give up. I was reading Skinnybitch the other morning, and she had this to say about the end of the year 2007:

But in the calm after the storm [of the holidays], as we survey the damage - bulging waist lines and a wicked hangover, most likely - most of us will become reflective and, perhaps, a bit remorseful. Another year is about to die, and with it, all our failed good intentions of the previous year. What about that resolution to go to the gym every day? To eat less and exercise more? To be more patient, organized, forgiving, productive and self-disciplined?

They and most of us are tapping into an essential undercurrent that flows at this time of year, this urge for self-reflection and introspection. So many of us share this sense that we haven't done it well enough, that we could do it better, and that therefore we should do it better. Sometimes loudly proclaimed, and sometimes unspoken and whispering around in the subtext, is that we are just not good enough as we are. Nothing is ever good enough as it is.

I see this as derived, in a way, from the Protestant work ethic. We should always be busy. Always working. Working at our jobs, working on ourselves, basically work work work. You better work! Time to lean is time to clean. Cleanliness is next to godliness. Ad inifitum. Ad nauseum.

But careful: our culture does not reward this introspection and self-reflection unless it results in concrete action. You will not be an effective, virtuous person unless you channel those New Years resolutions into successful accomplishments. If you fail--and you will (even disciplined April jokes about which resolutions will be the first to go)--you will be revisiting a self-prescribed litany of failures at the end of 2008, wondering how you got off track, while hopefully planning your salvation in 2009. Lather, rinse, repeat in 2010. Ad infinitum. Ad nauseum.

I'm not immune. I've practiced CRON only in fleeting fits and starts, actually gaining weight while simultaneously stopping exercise and losing muscle tone. I'm stretching the seams of my fattest clothing. I've all but abandoned work on my novel. I hatched elaborate plans to train for and run a marathon, then bailed as soon as I found out the Chicago race had filled up and I couldn't get in.

If I wanted to sit down and revisit my shortcomings, either explicitly by listing the failures, or implicitly by mapping out the resolutions for "positive changes" next year, I could easily do it. I could do it in my sleep. With my hands tied behind my back. Hell, with my hands AND legs tied behind my back. Hogtied, I could list and wallow in the muck of my shortcomings, my dashed hopes, and my failed expectations for the work I could and should have been doing all year long.

For me, however, this year has been about survival. At some point in 2007, I finally abandoned hope. I started giving up on my perfectionism, and my expectations for perfectionism in others. I started learning to wallow in my slothy, lazy ways, to calmly recognize my impetuous ego-clinging, to look clearly and honestly and without judgement at my difficulty in resisting the apetites that defeat me.

Always wanting to be noticed and appreciated and adored by others, I learned somewhwere along the way this year to embrace the anonymity that comes from not being virtuous and beautiful and perfect. It became comforting to realize that people were looking through me instead of at me. That I could at times become invisible. To feel a sense of comfort and relief when no one was thinking about me. To not mind when no one expected anything from me, and to not feel that others owed me something.

Losing hope sounds scary and depressing and nihilistic, but that's not how I mean it at all. If hope is one side of a coin, what's on the other side? Fear, it seems. We hope for better, but fear the worst. Our fear drives us to hatch harebrained schemes which THIS TIME will free us from the truth about ourselves for sure! We have fears about our story, our character, our essential nature. We hope to change them all.

We want to run away from our fears, but we're stuck because we can't run into the future where everything has already been solved. Hope is our way of getting around that pesky fact of our time-space continuum: we only have access to right now--this instant. And since we can't solve our problems this instant, we turn to hope. Hope gives us a place to locate our longings.

2007 was a tough year for me. And for my family. And for the world, for that matter. I'm glad I made it out alive, in one piece, and not too much worse for the wear. But I can honestly say that for the first time ever, I am not filled with remorse for the things that didn't happen in 2007. There are plenty of things I'm glad did NOT happen in 2007. In fact, the list of things that didn't happen that could have been or surely would have been worse is infinite! So I'm thankful for that!

I'm sure I had high hopes for 2007, but with all that actually occurred, I cannot really recall what they were. I can't quite bring forth the specter of who I was at the end of 2006 and all his horrible shortcomings and failures. Nor can I materialize the ghost of who I thought I'd be at the end of 2007.

Maybe the discomfort of getting up at 5am so I can squeeze a reviving workout in at the gym, and the irritation of being a little tired, maybe that's not so scary.

Maybe being bored and lonely isn't frightening enough to make me flee to the warm comfort of an extra glass of wine.

Maybe being alone and quiet and still isn't so bad, and even if it feels so bad in the moment, well maybe feeling bad doesn't always require an escape or a remedy.

Maybe if I'm not so afraid to confront and engage with the pain (whatever type it is), I won't hope so hard for it to go away. Maybe I won't feel so strongly the urge to act based on my hopes and fears, instead of acting on what's actually happneing here, now, in this moment, where and when I actually have the ability to act.

I can't honestly say that I don't have hopes for 2008, and fears too. Those thoughts will surely cross my mind every day. My idea is to not be ruled by them. To let those thoughts cross my mind the way a bird crosses the sky...see them up there flying by, and let them continue on their way to wherever they are going, leaving me to sit here quietly.

The hand gesture depicted in the image at the top of this Gratuitous Musing is called the Abhaya Mudra. It means "no fear."

(But I might still blog about it once in awhile...)